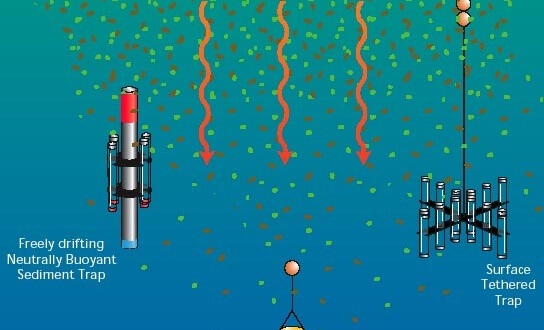 [NB: The second entry in this series was published here, Sediment Traps: Historical Trends and the Promise of Innovation, which covers some of the history and development of sediment traps as well as my own hopes for the field moving forward.]

The biological carbon pump (BCP) is the mechanism whereby marine, biological systems sequester atmospheric carbon into ocean sediments. CO2 fixed by photosynthesis is processed through the ecosystem before either being recycled or respired. Some carbon (<1%), which is packaged into particulate organic matter (POM), escapes to the sea floor and gets sequestered for geological timescales (Berelson et al., 2002).

Export can be partitioned into the actively transported fraction and the passive, gravitationally settled fraction of particles. Active transport of particles includes diel vertical migration of pelagic organisms including plankton and mobile organisms (Al-Mutairi and Landry, 2001; Davison et al., 2013; Steinberg et al., 2000), while the passive transport primarily consists of fecal pellets and aggregates (Stukel and Landry, 2010).

For gravitationally settling particles, the importance of any particular size class varies with region, season and depth (Guidi et al., 2008) and can account for 50-80% of total export (Fasham, 2003).

A variety of tools and techniques have been developed in order to measure the small, yet important, fraction of carbon that is exported from the BCP. The oldest method, a humble sediment trap, is still in frequent use today for its long-established history and simple operation. A sediment trap is scarcely anything more than a “rain gauge” in the ocean recording how much organic matter falls into it over time. Methodological issues and physical constraints have made interpretation of sediment trap data challenging (Yu et al., 2001) while also inspiring modification and enhancements in design (Buesseler et al., 2000; Jannasch et al., 1980). Nevertheless, at present there are three fundamental restrictions on the technology: 1) mobile swimmers that degrade the sample (Lee et al., 1992), 2) uncertain hydrodynamic biases leading to over/under collection of particles (Ebersbach and Trull, 2008), and 3) particle dissolution and mechanical artefacts in collection.

Martin et al. (1987) described what has now become known as the Martin Curve which is an empirical, data-derived power function between depth and vertical flux. Starting at the base of the euphotic zone and extending to the abyss, the vertical flux is assumed to conform to a power function (Eq 1).

Where F0 is the flux at the base of the euphotic zone, Z0 the depth of this base, and Fz the flux at depth Z (Olli, 2015). Although the Martin curve has found wide use, the ability to quantitatively determine the base of the euphotic zone over the integration period of the sediment trap flux has fundamental implications for the accuracy of any such formula (Olli, 2015).

Direct measurement of sinking particulate matter remains an unsolved problem in the study of carbon export in marine and limnic systems. Attempts such as the Optical Plankton Counter (Zhang et al., 2006) and Underwater Vision Profiler (Picheral et al., 2010) to provide direct measurements have found it difficult to partition particles between sinking flux and drifting flux, the latter of which should not be counted in true particle export. Distinguishing between slowly sinking particles and neutrally buoyant (non-sinking) particles is nearly intractable using direct measurements.

A continuing issue in the use of sediment traps is the lack of a proper validation. While there is much supporting evidence that sediment traps can usefully sample sinking particles, many assumptions must be maintained. Disagreement between expectations and measurements often go unrealized or are attenuated by interpretation: there is a “failure to fail” (Franks, 2009).

Sediment trap derived fluxes have been used to validate radionuclide disequilibrium techniques, notably 210Po:210Pb and 234Th:238U, even with the large uncertainties in trapping efficiency and sampling biases. The agreement of two different measurements with different assumptions does build confidence in the results, but the disequilibrium-derived results are not truly independent of the sediment trap results. Since the radionuclide methods require knowledge of the nuclide to carbon ratio (e.g. C:234Th or C:210Pb) , the biases in one method may well impact the results of another method. Quantitative prediction of this ratio is not possible due to fundamental uncertainties (Burd et al., 2000).

While classically disequilibrium methods were validated against sediment traps, there are examples of the opposite occurring: sediment trap results being validated by disequilibrium methods. This alludes to a fundamental issue in the measurement of particle flux: there is no ‘true’ value, which can be measured and can be used for validation of any particular method. Without such an underpinning, all the techniques used ultimately rely on a sort of bootstrapping of results based on hypothetical understanding and on other, analogous results.

Sediment trap data provides invaluable biochemical data for use in biogeochemical models, which are currently being constructed in order to study the impact of climate change on large scale ocean dynamics such as carbon cycling (Laws et al., 2011; Liu et al., 2015).

One thought on “Introduction to Sediment Traps”